RUSSIA-UKRAINE: WHERE TO NOW?

In early-April, there was a dramatic shift in the US/NATO approach to the Russia-Ukraine war. US and European statements defined new, maximalist goals for its endgame.

President Biden’s remark in end-March that “Putin cannot remain in power” had been quickly ‘clarified’ by his aides as an off-the-cuff remark, but a few weeks later, Secretary of State Blinken made the considered assertion that “a sovereign,

Russia leaps over the cliff

After four months of Russian troops massed on Ukraine’s borders, President Putin announced his decision to launch a “special military operation” into Ukraine, early in the morning on 24 February. This was preceded by an equally dramatic announcement on 21 February of Russia’s recognition of the two self-declared Donbas “republics” of Donetsk and Lugansk, followed by the signing of a treaty of friendship and cooperation with each of the

The decibel-level of the Russia-West standoff over Ukraine has been rising inexorably over recent weeks. Reports of the Russian military build-up near Ukraine’s borders quote ever-higher troop figures and more aggressive postures. Russia has been accused of political subversion in Ukraine, false flag operations as a pretext for invasion and cyberattacks on Ukrainian official websites. Russians have been equally vocal in al

2020 and 2021 have seen a litany of commentaries on the health and relevance of the India-Russia relationship, prompted by the postponement of the annual summit in 2020, the India-China standoff in Ladakh, President Putin’s comments on a Russia-China quasi-alliance, Foreign Minister Lavrov’s intemperate comments about India’s Indo Pacific engagemen

The award of the Nobel Peace Prize 2021 was awaited with expectant anticipation in various constituencies in the post-Soviet space. The responses to the announcement ranged from quiet relief in official circles to indifference and disappointment elsewhere.

About a couple of months ago, the Russian media bristled at President Biden’s comment that President Putin was in “real trouble”, because of an economy “that has nuclear weapons and oil wealth and nothing else”. As the summer wore on, Russia fortuitously found itself in a position where it could leverage its oil (and gas) w

• Afghanistan: Russian schadenfreude may be short-lived
• Can/Will the US engineer a Russia-China split?
• Russia and India re-engage on Afghanistan

Afghanistan: Russian schadenfreude may be short-lived

As the Taliban rolled into Kabul with unexpected ease, the first reactions in Russian media, academia and officialdom were of glee at the Americans’ discomfiture. The social media gloated that the fate of the government in Afghanistan also awaited that in Ukraine, since the US was in

On July 2, the Russian president signed off on the country’s new National Security Strategy (NSS), succeeding NSS 2015. NSS 2021 has apparently been under discussion in the Russian Security Council (which President Putin chairs) since mid-2020. Presumably, Covid 19 an

• Biden and Putin explore “rules of the road”
• Proof of the pudding: Afghanistan, Iran, Syria
• Russia and China transcend alliance
• Putin skates around the Quad​​​​​​

Biden and Putin explore “rules of the road”

The June 16 Biden-Putin meeting in Geneva – awaited with anticipation in Russia, unease in Europe and scepticism in the US – generated just a sliver of hope for some abatement in the acrimony that has dominated US-Russia relations over the past decade.

Faced with criticism a

US & Russia move gingerly towards a summit

With the US Intelligence Community confirming Russia’s interference in the Presidential elections of 2020 and its involvement in the “Solar Winds” cyber hacking, and the inevitable US sanctions that followed, US-Russia relations looked like continuing on the turbu

• Russia & US talk and spar
• Ukraine crisis erupts; a lid is put on it
• A band-aid for India-Russia relations

Russia & US talk and spar

The US intelligence community had determined that Russia had interfered in the 2020 Presidential elections and that Russian intelligence was behind the Solar Winds cyber hacking. Tensions in eastern Ukraine were escalating. Just when it seemed the US-Russia hostility would move up a notch, President Biden telephoned his Russian counterpart on Apri

By accident, coincidence or design (or a combination of them), US-Russia relations are administered a jolt whenever they show the slightest signs of a thaw. This time, the jolt came from a March 15 decision of the US Director of Natio

• Which is the bigger threat: Russia or China?
• Navalny: in Europe we trust
• Nordstream 2: in or out?
• Eastern Ukraine: on a snakes-and-ladders board
• Sputnik V finally takes off (almost)​​​​​​

Which is the bigger threat: Russia or China?

Pronouncements on the foreign policy and national security priorities of the Biden Administration provided some clues on unfolding US policies towards Russia and China, in Europe, on Ukraine and with respect to Syria and Afghanistan.

Over the past few months, this Review has recorded Russia’s expectations and apprehensions about the course of Russia-US relations under the Biden Administration. The return to office of officials who had occupi

The narrative of dilution and drift in India-Russia relations has been prevalent in Indian political, official, business and media circles over a few year

Vladimir Putin is one among very few world leaders not to have congratulated US President-elect Joe Biden. Asked about this, Foreign Minister Lavrov gave the legalistic response that congratulatory messages are usually sent after offici

The world according to Putin

It is universally believed that President Putin has unchallenged control over Russia’s foreign, defence and security policies. He makes frequent public pronouncements on these issues, announcing,

Belarus challenge for Russia and the West

The ongoing events in and around Belarus raise the prospect of yet another part of Russia’s “near-abroad” drifting away from it.

The runup to the Presidential elections was marked by a controversy over the arrest by Belarus authorities of 33 private military contractors of Russia’s Wagner group, accusing th

Between 25 June and 1 July, Russia held a referendum, involving e-voting, postal ballot and physical voting (on July 1), in which they approved the constitutional amendments that flowed from President Putin’s “Stat 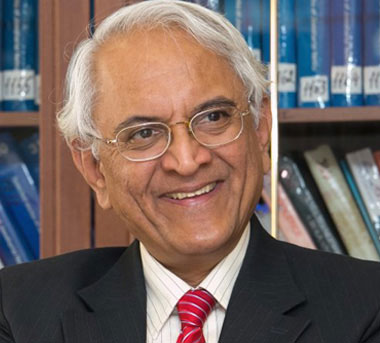 Born in 1955, Ambassador Raghavan holds a B.Sc. (Honours) degree in Physics and a B.E. in Electronics & Communications Engineering. He joined the Indian Foreign Service in 1979. From 1979 to 2000, he had diplomatic assignments in USSR, Poland, United Kingdom, Vietnam and South Africa, interspersed with assignments in the Ministry of External Affairs (MEA) in New Delhi. From 2000 to 2004, he was Joint Secretary in the Indian Prime Minister's Office dealing with Foreign Affairs, Nuclear Energy, Space, Defence and National Security. Thereafter, he was Ambassador of India to Czech Republic (2004 - 2007) and to Ireland (2007 - 2011).

He was Chief Coordinator of the BRICS Summit in New Delhi (March 2012) and Special Envoy of the Government of India to Sudan and South Sudan (2012-13). Ambassador Raghavan conceptualized and piloted the creation of the Development Partnership Administration (DPA) in MEA, which implements and monitors India’s economic partnership programs in developing countries, with an annual budget of $1-1.5 billion. He headed DPA in 2012-13. From March 2013 to January 2014, he oversaw the functioning of the Administration, Security, Information Technology and other related Divisions of MEA. Since October 2013, he was also Secretary [Economic Relations] in MEA, steering India’s bilateral and multilateral external economic engagement. Ambassador Raghavan retired from the Indian Foreign Service in January 2016, after serving from 2014 as Ambassador of India to Russia. Since September 2016, he is Convenor of the National Security Advisory Board of the Government of India.