By end October Latin America and the Caribbean had registered close to 11 million cases and 400,000 deaths from the virus. Brazil was the highest, with about 5.4 million and over 160,000 deaths. Other severely affected countries are Argentina, Mexico, Peru, Colombia. States with smaller populations which saw disproportionate rates of infections and deaths include Chile, Ecuador, Bolivia, Dominican Republic and Panama. Some of the governments reintroduced lockdowns in the wake of a second wave of infections. The economy of the region continued to reel from the pandemic with exports of most commodities, especially hydrocarbons and some minerals, hit adversely. As GDP growth dived, the World Bank stepped in with $4.5 billion of mainly project-directed assistance.

Luis Arce, the candidate of MAS, the party of former President of Bolivia Evo Morales, won the 18 October presidential election in the first round with 55 percent of the vote. Bolivia passed through decades of political turmoil and short-term presidents before the arrival of Evo Morales, the socialist indigenous leader, who ruled for 14 years before being deposed after his re-election victory was called into question in 2019. Morales was vindicated, after having been hounded by his political opponents and living in asylum in Argentina. Under his presidency Bolivia’s average GDP growth was 4.9%, with inflation holding steady at 5.5% and international reserves reaching $15 billion - about 50% of GDP. According to Reuters, "Evo Morales .... steered South America's poorest country through an unprecedented period of political stability and economic prosperity since sweeping to power in 2006." The divide between right and left (and indigenous and white) was evident over the past year. The interim President, Jeanine Anez was never a convincing leader. She renounced her candidacy when her unpopularity became clear. A beleaguered left in Latin America celebrated, especially Venezuela’s Nicolas Maduro and the Cuban regime. For Bolivia, which has seen political violence too often, the election with a massive turnout over 80%, certified by international observers as peaceful and lawful, promises an orderly handover and hopefully more political harmony. The international community, especially the US, will closely watch Arce, who was Finance Minister to Morales, to see if he can be his own man, not just a surrogate of Morales, who is expected to return to Bolivia in triumph. In contention will be the much needed economic and social recovery from COVID19, which has hit Bolivia hard, as well as policy towards coca cultivation in Bolivia, which Morales defended vigorously against western pressure.

On 24 October, Chile voted in a plebiscite to change the country’s 1980 constitution. The plebiscite was held after violent demonstrations that began last year, starting with protests against rising bus fares and developing into a denunciation of increasing economic inequality in Latin America’s most developed country. 78 percent voted to draft a new constitution in place of the current one, ‘drafted without popular input during the military dictatorship of Gen. Augusto Pinochet and approved in a fraudulent plebiscite in 1980’ according to the New York Times. There will be a newly elected constitutional convention, without automatic inclusion of Congress members. Elections will be held in April to choose the delegates. Chile will vote in 2022 to approve or reject the new draft. After transitioning to democracy in 1990, market-friendly Chile attracted foreign investment, saw growth and reduction of poverty, but also concentration of wealth and growing inequality. The United Nations Economic Commission for Latin America estimated that nearly a quarter of total income goes to 1 percent of Chile’s population.

On 12 September, Mauricio Claver-Carone, the US candidate was elected President of the Inter-American Development Bank (IDB) based in Washington. Established in 1959, the multilateral regional bank has always been headed by a Latin American. This time the Trump administration forced its candidate, despite opposition from Mexico, Argentina, Chile and Costa Rica, who initially appeared to have 25 percent of votes needed to block his election. Brazil and Colombia led the US campaign in the region. Former Costa Rican president Laura Chinchilla and Gustavo Beliz of Argentina, quit the race before the vote. Claver-Carone was appointed to Trump’s National Security Council in 2018 and is a known hawk. The conservative candidate will attempt to counter China’s growing influence. The Bank, which lent US$ 13.5 billion to LAC countries in 2018, has 20 extra-regional partners (16 European, China, Japan, Israel and South Korea) with full voting rights. India was invited to join over a decade ago but has yet to make up its mind.

The Venezuelan opposition split in September with opposition leader Henrique Capriles, along with a few other prominent politicians, declaring they would fight the December elections to the National Assembly (NA). The last elections, which saw the opposition gain a two-thirds majority, gave them a platform to challenge President Nicolás Maduro. Most prominent opposition figures were hounded, jailed and otherwise contained, which threw up Juan Guaidó as the face of the anti-Maduro coalition. Guaidó’s inability to seriously challenge Maduro, despite massive support from the US and 50 other countries, seems to have convinced some opposition leaders that boycott will not help.

In Peru, President Martin Vizcarra, in office for about two years since his predecessor Pedro Pablo Kuzcynski stepped down over a scandal, survived an impeachment motion in Parliament on 18 September. The motion was brought by his political opponents over audio recordings in which Vizcarra was implicated over an influence-peddling scandal. After the military and some influential opposition leaders opposed the motion, arguing in favour of political stability till the next elections in July, it was defeated with only 32 votes in favour, far short of the 87 required for a two-thirds majority. Vizcarra has been a centrist leader and steadied politics in Peru, which is the country worst hit by COVID in Latin America, in terms of deaths per million of population, and an economy set to contract 12 percent this year.

The COVID pandemic has aggravated the resource curse that some Latin American countries have suffered in recent decades. The case of Venezuela is well known – an economy 90% dependent on oil revenues and currently in turmoil because of US sanctions that have choked off oil exports, while production has plummeted. In October the pro-government Constituent Assembly passed a law giving President Maduro the power to confidentially sign new oil deals with private firms and foreign nations. Claiming the law is in response to U.S. sanctions, the “anti-blockade” bill will allow changes to the ownership of joint ventures between state oil company PDVSA and private companies, but does not say what percentage of participation PDVSA would have in future joint ventures. Other major producers have seen production decline as their debts rise. Mexico’s national oil company, Pemex, has US$ 30 billion in debt due by 2024 and little prospect of profits this year or even in 2021. Brazil’s Petrobras has a staggering debt of US$ 78.9 billion and is trying to offload assets in an uncertain market. The latest to join this group is Guyana, where offshore oil discoveries a few years ago have not realised the promise of plenty. This has been partly due to COVID19 and the fall in crude prices. The new government is reviewing the terms of production sharing contracts, which may also deter investment in this sector.

In early October, the European Parliament voted to rejected the European Union-Mercosur free-trade agreement due to what several parliamentarians have called “deep concern about the environmental policy of Jair Bolsonaro.” Though the vote is largely symbolic, since the ratification will depend on the member countries, the amendment in a report on the application of European trade policy, emphasizing that the “EU-Mercosur agreement cannot be ratified in its current form”, received 345 votes in favor, 295 against, and 56 abstentions, signifying European resistance to Brazil’s neglect – defiance according to some – of its environmental obligations in the Amazon rainforest. It is highly likely that the the EU will seek additional guarantees by the Bolsonaro government on the environment before ratifying the agreement that has been under negotiation for around a decade.

On 16 October EAM Jaishankar and Chile’s Foreign Minister Allamand Zavala, participated in the first India-Chile Joint Commission meeting. The JCM mechanism is important since it establishes a matrix for high level meetings at which the entire relationship can be covered. India has JCM with very few Latin American countries. Chile is India’s fifth-largest trade partner in the region. Trade worth $1.968 billion in 2019-20 was in Chile’s favour, mainly due to copper imports of $ 843 million. The two sides signed a Double Taxation Avoidance Agreement in March 2020 and are working on a Bilateral Investment Protection Treaty. Discussions included expansion of the Preferential Trade Agreement (PTA), first established in 2006 and expanded in 2016. Under the current PTA, India offered tariff concessions on 1031 tariff lines to Chile and the latter offered concession on 1798 tariff lines. In February 2020 both sides held the first round of talks to further expand the PTA. The MEA statement claimed both sides also discussed “agriculture, health and social security, defence, space, science and technology, energy, mining, culture and education, disaster management and cooperation in Antarctica,” apart from a Joint Business Council and long term multiple entry visas. Chile is a founder member of the Pacific Alliance, a business-friendly grouping of countries on the western seaboard of South and Central America, where India has observer status, and is a member of the International Solar Alliance.

With the US government tightening the screws on Venezuelan oil exports, most international companies, including Spain's Repsol REP.MC, Italy's Eni ENI.MI, India's Reliance Industries RELI.NS and Thailand's Tipco Asphalt TASCO.BK will have to terminate crude imports by November. Reliance Industries has received 4 million barrels of Venezuelan crude in September, and will import 5 million barrels more in the coming weeks. Industry reports indicate that Reliance plans to halt imports of Venezuelan oil in November - also shipments of diesel after a cargo shipped in September - till after the US election and a new US administration is in place.

Eicher Motors, the maker of the iconic Royal Enfield motorcycles, announced early September that it would be setting up its first assembly plant outside India (Chennai) in Argentina. Royal Enfield has 31 exclusive stores and 40 other retail touchpoints in Latin America. Brazil, Argentina and Colombia are the three most important markets. The local collaborator is Grupo Simpa, which has been Royal Enfield’s local distributor since 2018. Enfield joins Bajaj, Hero, TVS as yet another Indian motorcycle to make a mark in Latin America. 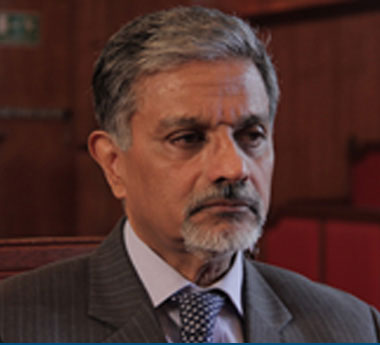 He writes extensively on Latin America and its relations with India. He has written a book published in 2015 titled 'Latin America, the Caribbean and India: Promise and Challenge'.

He served as Independent Director in Bharat Petroleum Corporation Ltd. and Transrail Lighting Ltd. between 2018 and 2021.